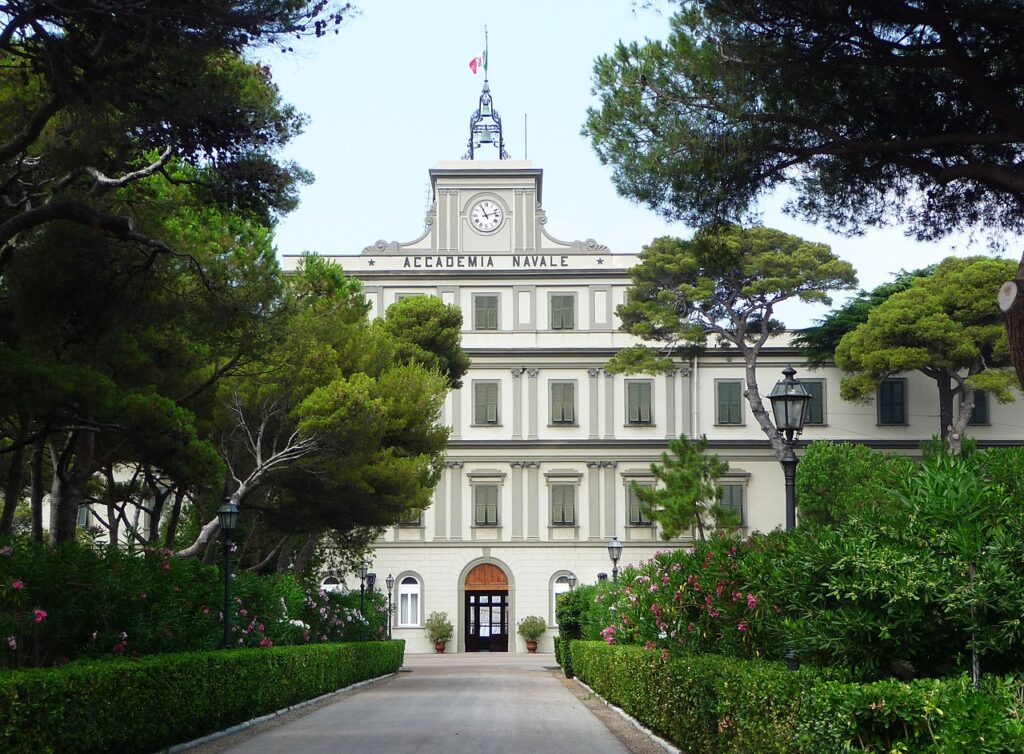 The Naval Academy of Livorno is a military university training institution, employed by the Navy Schools Inspectorate, open to both sexes, which deals with the technical training and military preparation of the officer students of the Italian Navy

The unification of Italy and the constitution

The Royal Navy School was born, by decree of 20 September 1868, from the union of the “Royal Navy School” of Genoa (established in 1816), the Navy of the Kingdom of Sardinia established on 1 October 1815 and the Bourbon one, the Real Marina Academy founded in 1715 in Naples, following the unification of Italy and the establishment of the Royal Navy. When the then Minister of the Navy, Admiral Augusto Riboty, unified the two schools into a single Institute, he divided them into two Commands, called Divisions. From that moment the students followed the first two years of the course at the Naples branch and the last two in Genoa.

The institution follows the wish of Count Camillo Benso di Cavour who had advocated the creation of a single school for the education and training of young officers, in Livorno, an ideal location for its geographical position.

The transfer to Livorno

Only in 1878, with the transformation of the School into a Naval Academy, with a law presented by the then Minister of the Navy, Admiral Benedetto Brin, was Livorno indicated as the headquarters.

The design of the complex of buildings was entrusted to the captain of the military engineers Luigi Pestalozza and the works were started in 1878; the engineer Angiolo Badaloni from Livorno actively followed each project

The Naval Academy was inaugurated in Livorno on November 6, 1881, in the presence of the Captain of Vascello S.A.R. the Duke of Genoa Tommaso di Savoia, and initially occupied only the area of ​​the lazaret of San Jacopo, near the church of the same name.

The first Commander of the Naval Academy was Rear Admiral Andrea del Santo; one of the first official pupils to attend the academy was Manlio Garibaldi, last son of Giuseppe Garibaldi, who in fact bought a villa in the Ardenza area.

The Naval Academy received the Institute flag in 1906 from King Vittorio Emanuele III who handed it over to the Commander of the Institute, a position held by the then Captain Thaon di Revel, who would have been the architect of the victory over the sea during the subsequent First World War. In 1913 the adjacent area occupied by the pre-existing San Leopoldo hospital was then annexed to the complex of the Naval Academy.

The buildings of the Naval Academy, starting from 1923, also hosted the students of what was to become the Air Force Academy. The Regia Aeronautica, in fact, established as an autonomous armed force, used this provisional accommodation for its officer students, waiting to equip itself with its own academy. In 1926, three years after the start of the courses, it was decided to move to Caserta at the royal palace, while the institute is currently based in Pozzuoli.

During the Second World War, due to the bombings that hit Livorno between 1943 and ’44, the Naval Academy was first forced to move to Venice and, after only two months, to Brindisi, at the Collegio’s facilities. naval “Niccolò Tommaseo” of the GIL, where he remained until June 5, 1946, the date on which the Naval Academy returned to Livorno.

From the second post-war period to today

The first flag with the republican emblem, was formally delivered on December 4, 1948, the day of Saint Barbara, patron saint of the Navy, by the President of the Republic Luigi Einaudi.

Since the bombings had heavily affected many of the buildings in the city and also the structures that housed the academy, it was necessary, at the end of the conflict, to undertake a substantial work of reconstruction and strengthening of the infrastructures, which lasted over a period of about twenty ‘years.

In 1966 the “Palazzo Studi” was built, the current seat of scientific laboratories and specialist classrooms.

On 3 March 1977, thirty-eight students of the Academy’s “Invicti” course and six crew members died following a serious plane crash: an Air Force C-130H crashed on Monte Serra, in the province of Pisa

Scroll back to top